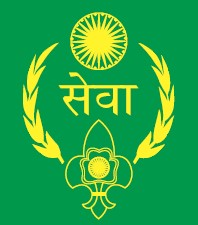 1. Ensure Proficiency in the tests undertaken up to Tritiya Sopan.

5. Work on one of the following for six Months and submit a report – Kitchen Garden/Roof Garden/ Hanging Garden/Nature Collection.

6. Mapping: Make a map by using any one of the method not done earlier: Plane Table or Triangulation or Road Traverse

10. Have knowledge about the BSG website and gain information about your Region.

Sea Scout
In addition to Rajya Puraskar test given above a Sea Scout will:

Air Scout
In addition to Rajya Puraskar tests, an Air Scout will:

(i) Rajya Puraskar Badge consists of the emblem of the Bharat Scouts & Guides at the bottom, the Ashoka Chakra at the top, and word ‘SEVA’ in Devanagari script in the centre surrounded by a laurel. Rajya Puraskar Badge shall be worn in place of the Tritiya Sopan Badge.

(ii) The Badge is issued on the basis of certificate issued by independent examiners appointed by the Local / District Badge Committee.

(iv) The State Chief Commissioner who is the final authority to grant Rajya Puraskar shall issue from time to time suitable directives in respect of badge, tests etc. and ensure proficiency of knowledge and skills upto Tritiya Sopan Badge and Proficiency Badges.