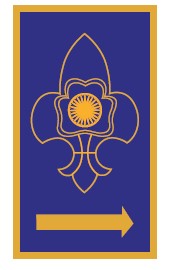 (a) A Heerak Pankh Bulbul having earned totally six Proficiency Badges. One badge each in Swarna Pankh and Heerak Pankh, remaining four badges to be earned from the proficiency badge groups not earned earlier. She may be awarded a special badge called “Golden Arrow” before completing ten years of age. The Badge will be on blue background with golden border with a prominent golden arrow with the Bharat Scouts and Guides Emblem in the centre. The Badge will be worn above the right pocket of the overall. “Golden Arrow” Badge is presented by the President of Bharat Scouts and Guides along with the certificate signed by the Chief NationalCommissioner.
(b) The Chief National Commissioner who is the final authority to grant the Golden Arrow Badge and Certificate on the recommendations from the State Chief Commissioner.
(c) The Chief National Commissioner shall issue suitable directives from time to time in respect with Golden
Arrow Badge.
(d) The State Association will organize a re-test camp under the supervision of State Organizing Commissioner (G).
(e) A Flock Leader who is an advanced trained and has a valid warrant will be competent to produce Golden Arrow Bulbul.
(f) All Proficiency Badges must be tested by the independent Badge Examiners appointed by the Badge Committee of the Local / District Association and required details should be given in the registration forms as supplied by the National Headquarters.
(g) Unit Leader is not eligible to work as an independent Badge Examiner of the same unit.
(h) A Bulbul should have completed not more than ten years of age at the time of submission of her Golden Arrow registration form to concerned Regional Headquarters.
(i) There will be no limit for the eligible Bulbuls to be recommended by the Flock Leader from her Unit for the Golden Arrow Badge.