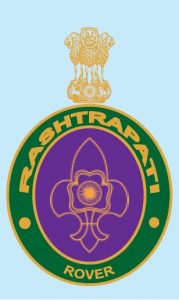 1) The Rashtrapati Rover Award is a unique distinction in the Movement for it alone carries with it a certificate containing a message from the President of the Indian Union.

2) As a Rajya Puraskar Rover, he will work at least for one year to qualify for the Rashtrapati Rover Award

3) A Rover is not eligible to qualify for Rashtrapati Rover Award on completion of 25 years of age.

4) The Warranted Rover Leader irrespective of his training qualifications shall inform the NHQ through proper channel on a prescribed registration form available at State Headquarters/BSG Website that Rajya Puraskar Rover is preparing for Rashtrapati Rover. In the absence of a Rover Scout Leader, an Assistant Rover Scout Leader can also recommend.

6) Rajya Puraskar Rover, who has already fulfilled all required conditions, will have to be tested at State Level and certified by the State Organising Commissioner concerned before coming for Rashtrapati Rover Award Testing Camp organised by the National Association under the supervision of the concerned Assistant Director.

7) At the time of Rashtrapati Award Testing Camp a Rover will produce his individual progress card. To qualify for the Rashtrapati Rover Award a Rajya Puraskar Rover must complete the following:

1(A) Choose any one of the following and discuss in the Crew Council and submit a report based on statistics and data collected for approval:

2. Undertake a Community Development Project on Health or Food Production or Environment or Sanitation or a project suited to the particular area with the approval of Crew Council for at least three months with the crew and submit a report to the Crew Council.

3. Render service at least for five days in a camp at District/State/National level.

4. Participate in Community Service Project for not less than thirty hours spread over a period of at least two months and should work once in a week

5. Twenty Four hour Survival Hike: Stay in an open place with another Rover and survive with available Natural Resources. Or Participate in a cross country overnight Adventure Hike.

6. Develop Internet Friendship with at least twenty members of the movement of other states as well as other countries

Be a member of Messenger of Peace and upload at least five projects on the MoP website.

Establish a Geet Manch through crew and Sing Songs from publications of BSG such as Geet Bharti, Swarn Swar Lehri, Patriotic Songs, Songs Promoting Secularism and National Integration etc. at public places in a village/town/city for ensuring visibility of the Movement.

7. Qualify for the following Proficiency Badges:

ii) Any one of the following Rover Proficiency Badges not earned earlier:

Sea Rover:
In addition to tests for Rashtrapati Rover Award mentioned above a Sea Rover will:

Air Rover:
In addition to Rashtrapati Rover Award tests mentioned above an Air Rover will:

(1) Demonstrate skill in Aerobatics with an aero model. OR Have an experience in a glider for three times.

In an aircraft for a minimum of half an hour.

(3) Have knowledge about military Aircrafts used in the neighbouring countries.

Grameen Rover:
Prescribed syllabus for all tests assigned for Rovers will be applicable for Grameen Rovers. However, subjects found difficult or not related to Grameen Rover may be replaced by appropriate local activities/projects with the permission of SCC on the recommendation of DCC & SOC. The area specific alternate activities may be allowed by the State Chief Commissioner and certificate to that effect should be produced in the testing camp.

(ii) The Chief National Commissioner who is the authority to grant the Rashtrapati Rover Award shall issue from time to time suitable directions in respect of the badge tests, services, etc.

(iii) On completion of the requirements successfully a Rajya Puraskar Rover shall record his attainments for the Rashtrapati Rover Award on a prescribed form and submit the same to the National Headquarters through proper channel. The Rover must, in the opinion of the Crew in Council be setting a personal example of Scout way of life.

(iv) The Chief National Commissioner shall approve the Rashtrapati Rover Award on basis of certificates of the examiners and on the recommendations of the Crew in Council, the concerned District Commissioner and the State Chief Commissioner.

(vii) Even if a Rover has undergone any training course of the Unit Leader, he will be eligible for Rashtrapati Award.